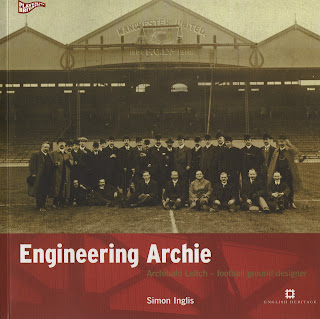 I really enjoyed reading 'Engineering Archie' by Simon Inglis (can be found here)  - a book that looks at some of the early football grounds designed by architect/engineer Archibald Leitch. One of the more interesting things about the book was that it was sponsored by the architects HOK Sport. The foreword by Rod Sheard (of HOK Sport) reads:


'I started my career as a football stadium designer 25 years ago and from my very first project to my latest, Archie's fingerprints have always seemed to be present... I have on several occasions had to extend, modify, build around or even demolish Leitch's stands, and in that time I have come to appreciate not only the quantity of his work but also the quality and sophistication in his designs'

It was probably only a matter of time before HOK Sport started noticing Leitch's designs, as they've (I'm currently browsing their website) been responsible for developing numerous UK stadia. I think it's a great mark of respect to Leitch that HOK are sponsoring a book about him, and it would be interesting to know at what stage HOK started noticing similar characteristics in the stadiums they were developing.

Quickly the book takes a sour turn. A few of Leitch's stadiums had disasters, involving collapsing stands and barriers that led to supporter injuries, sometimes deaths, and a lot of bad press for the architect.

This graphic picture shows the 1902 terrace collapse at Ibrox, where the wrong (weaker) type of wood was used, resulting in 80-100 injuries. You can see where the wooden terracing has collapsed (due to weak joists) and where the corrugated fencing has been torn down to reach the victims who fell almost three storeys. Luckily the stand was only at twenty percent capacity, and amazingly nobody died in the accident.


I was not only surprised at how football clubs still wanted to employ Leitch after each disaster but also at the personal battle Leitch went through with himself to make his grounds safer and safer, rather than throwing in the towel. This was a time when architectural/engineering accidents were common; when suspension bridges were collapsing because of wind pressures, and when buildings were never fire-proofed. In the early 1900s horses were still being used to assist construction.


I was glad to read that Leitch picked himself up and developed safer and safer stadium designs, including writing requirements for terracing materials, safety (crush) barrier distances and shorter staircases with more landing space that allow for safer movement of supporters. Needless to say, some of Leitch's terracing requirements were ignored leading up to the infamous Hillsborough disaster of 1989 (although the disaster was the sum of many factors). This resulted in terracing being outlawed in the UK and HOK Sport being asked to redevelop some of Leitch's stadiums.

In the (post-Hillsborough) redevelopment of Ibrox Park, the architects chose to keep the listed grandstand intact and to add another tier on top of the existing double-decker tier, when it would have been much simpler to knock down the old grandstand and start from scratch:


It was a shame to see so many black and white photographs of demolished stadiums in the book when Ibrox Park decided to celebrate Leitch's designs by building around them. I'm interested in the relationships between all old and new buildings, and I strongly believe that architectural preservation is a better solution, and has much more architectural merit, than demolishing a historic stadium with so much character, full of memories, for a 'sole-less bowl' - an expression often used to describe modern football stadia.


I hate seeing historic buildings in a state of decay, but I really dislike seeing pictures of beautiful stadiums that have been demolished for bland boxes or bowls in their place. In the current state of multi-million pound football player transfers and multi-million pound stadiums, I find it quite fun looking at historic pictures of men with moustaches kicking leather footballs on muddy pitches, in front of Leitch's pitched-roofed terraces and their iconic gables.