I could have scanned every page in this book. Ching's drawings are excellent, informative and are usually self-explanatory. As a resource tool for university, the book is useful in ways such as explaining how to draw doors, windows and materials correctly; but it is also useful in stimulating the creative mind in terms of layout, and of different ways of drawing the same scene.

For instance, in the image below, Ching has shown the differences between hatching the foreground and hatching the background of the same section. 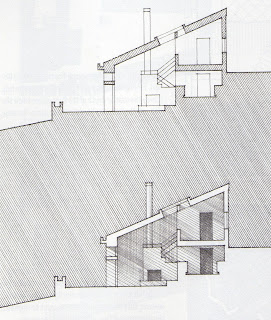 It seems obvious now, but I never used to follow the section cut into the sub-terrain level when I used to draw sections, instead I just treated the building as an individual object, (wrongly) floating in space rather than in context with its terrain. Both drawings show the spatial arrangements of this building quite clearly, but the drawing at the bottom has the added benefit of using the hatch pattern in the background to act as the sun's path into the building, distinguishing the shaded areas and the areas receiving the most natural light. However by treating the foreground section cut as negative (white) space rather than the background as negative space, labelling text can only sit in the white space underneath the main building mass. It makes sense then to use the first image for labelled diagrams and the second image to show spatial arrangements.


Ching also uses white space to highlight important areas within drawings. The drawing below shows the important part of the scene (which lacks hatching or shading) being framed by a dark foreground. I really have to try this contrasting light on dark drawing technique in future... I really admire it as a way of focusing in on an area of architectural or spatial significance: 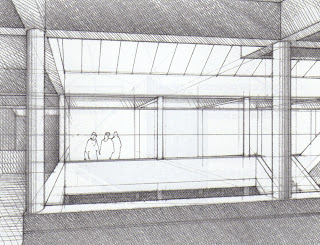 The light building on dark background also helps render parts of the scene as a sanctuary - a location you desire to arrive at. The dark areas in this simple sketch below imply stormy seas and grey skies. The house (I presume) below on the cliffs in the foreground already starts to look like a refuse from the unfriendly environment around it, just by the simple use of hatching. 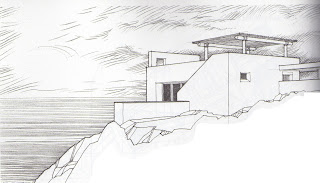 Ching also made me think about the use and positioning of trees in my designs. Before reading the book I would place trees in my designs without too much thinking about their location and the effects they would have on the environment and the people inhabiting the neighbouring spaces.

The image above shows trees being used to 'define outdoor spaces' and to 'direct movement'. Why would I need to design boundaries to enclose an outdoor space when I could just plant a few trees? I'd much rather sit in an outdoor area bordered by trees or vegetation than one enclosed by (for instance) bricks and mortar!


I learnt something from every page of Ching's book, so it's been hard keeping this blog entry short. But this last image shows something that's been weak in all of my presentations... people! I have always been criticised for not inhabiting buildings properly; using unsuitable silhouettes in peculiar positions, and not relating them to the environment in which they are placed. 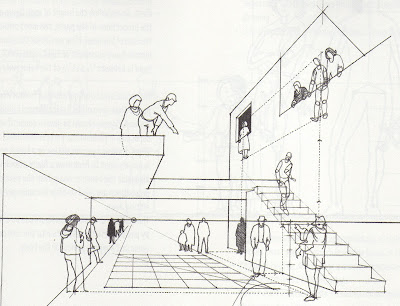 The people in this drawing all seem to relate to their environment. A figure is leaning against the wall, a woman has her hands over the edge of the balcony, and a man walks down the stairs. The figures on the top levels even appear interested in what's happening below them. These aren't silhouettes either - they are correctly proportioned, three-dimensional people. Silhouettes have their place in two-dimensional drawings such as sections or elevations but a three-dimensional drawing needs to be populated with three-dimensional people. I find it easy to relate to the people in the bottom level because the head heights are all on the horizon line, which is clearly shown. This seems to make it easier to draw the perspective correctly (by starting with the heads and drawing down) and ultimately making the scene more believable.


I've placed an order for this book on amazon as it's definitely one for my bookshelf, not just a book I take out of the library every so often for inspiration.
Posted by Alex Warren at 16:26