I've been puzzling the architecture of Borges' Library of Babel all day, as I am doing a presentation on it in a week.

The mythical/fictional library is made up identical hexagonal galleries, connected to infinite other hexagonal galleries in the X, Y & Z axis. In the centre of each gallery is a ventilation shaft surrounded by a low handrail, so librarians looking up the void can see infinite stories/layers of identical book shelves.

The books in the library each contain a randomly assembled jumble of letters and punctuation, so of course the majority of works are pure gibberish; but (as the infinite monkey theorem goes) 'give a monkey a typewriter and an infinite amount of time and he'll type the entire works of Shakespeare'. This principle is applied (multiplied) even further so that in this infinitely large library contains all the coherent books ever written and all the books that will be written in future.


"When I am dead, compassionate hands will throw me over the railing; my tomb will be the unfathomable air, my body will sink for ages, and will decay and dissolve in the wind engendered by my fall, which shall be infinite"

Decomposing bodies fall for an infinite amount of time, falling past melancholic librarians desiring the divine knowledge, to know everything. These librarians hear nothing but the clutter of bones of librarians who have died or committed suicide, falling from the stories above.


Librarians are in a state of suicidal despair, as most of the books are completely useless. As librarians go about destroying the useless books, many seek the holy grail of the library: the perfect library catalogue. It must of course be somewhere in the library. Some librarians believe others have read it (in an infinite amount of time, somebody must have), so enter inevitable conversations with other librarians asking if they have read it, or have met anyone who has read it. Some believe that the librarian who has found the book walks around with it, others think the book might have been thrown down the shaft so no others find it.

Floor to ceiling bookcases are hardly taller than the librarians that wander around the library. Toilets, food and spaces for librarians to sleep standing up are located in each hexagon. In every sixth hexagon is a spiral staircase, infinitely tall, where librarians can walk between different levels. Two artificial lights light each hexagon.


However none of the artwork I have found seems to meet the description of each space. In the image below, the lights block the ventilation shafts, meaning librarians who fall down the shaft are stopped by the lighting frames. The lights would have to be offset from the 'ventilation' in the centre. It also shows voids in between every few hexagons, but the only voids are the voids within the hexagons. 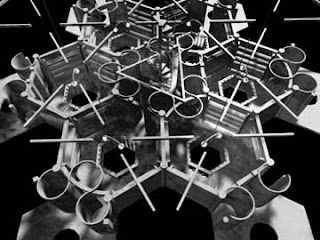 In the next image the floor to ceiling height looks multiple times higher than the height of a librarian. The huge scale however does convey a sense of infinity - of course space shouldn't be a problem in an infinite sized building... but the text does imply that the verticality of each floor height is very low:

'hardly greater than the height of a normal librarian'

The low, foreboding ceiling height may add to the suicide rate of the librarians. 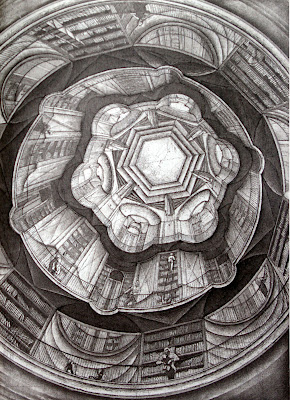 
For part of my library study for my design project, I need to create parti diagrams, plans and sections of the spaces, environmental considerations (really) and underlying concepts and design principles regarding the building. I was the only person to choose a mythical library (out of a list of numerous built or proposed libraries) for this study so I will have to create these images myself. I chose this 'building' study to be a bit different, and it's already working.